Jaya The Cat show in Münster is sold out!

The show tomorrow at Rare Guitar in Münster is sold out! There won't be any tickets at the entrance. Whoop whooop! 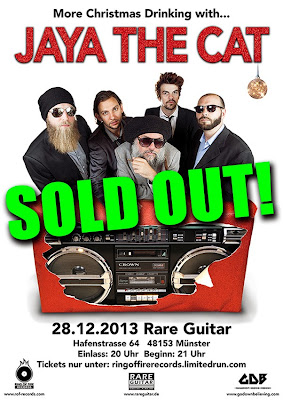 FINALLY! Rampires DVD is now available in the ROFR Shop!

You can order your copy now in the ROFR Shop. In a few days it should be available at your favorite record dealer too.

Work to do for a record label...

I'm dying to know what I've got to do on thursday :)

So put your dancing shoes on! (Thanks to Elli Popelli for the awesome illustration!) 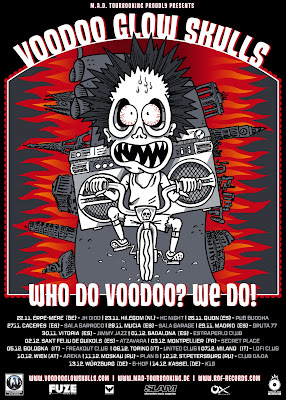 Koffin Kats - Born Of The Motor CD / LP OUT NOW!

Some nice colors for your christmas tree :) 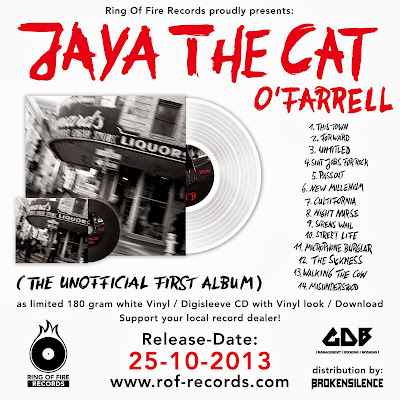 RING OF FIRE RECORDS presents O´Farrell, the unofficial first album by the band Jaya The Cat. Recorded back in 1999, it was never released until now, 14 years later. All the tapes were recovered and are now presented to the public for the first time as a white 180 gram vinyl limited edition (500 pieces), as a digisleeve-CD with vinyl-look and as download.

Back when singer Geoff wrote the songs for the album, he was living on the multi-cultural street O´Farrell in San Francisco - hence the album name. The typical Jaya The Cat sound is present on the album, however with more punk elements than usual: Distorted guitars with impulsive offbeat and above all Geoffs distinctive rough voice. Some of the songs were rerecorded for the album Basment Style. Highlights are the three brilliant cover songs Night Nurse by Gregory Isaacs, Walking The Cow by Daniel Johnston and Misunderstood, which was made famous by the Animals and is transformed to a rock-ska version by Jaya The Cat.

All photographs in the artwork were taken by Joseph Szymanski on and in the vicinity of O´Farrell street. Szymanski is a photographer from San Francisco who spends his time working mainly with analogous film material and developing his own photos in a darkroom, and also teaches at the Academy of Art University in San Francisco.
Eingestellt von Ring Of Fire Records um 07:23 Keine Kommentare: 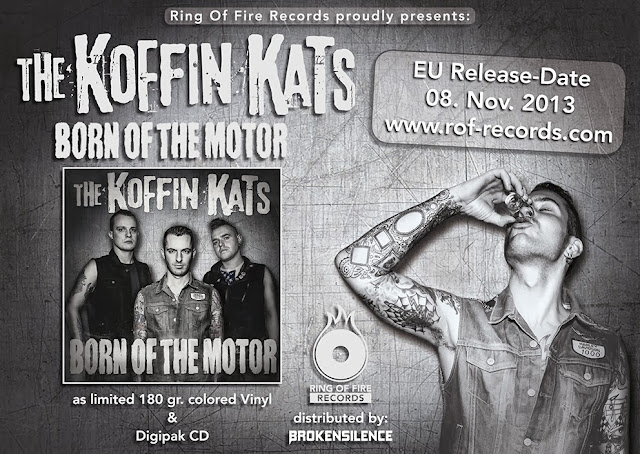 Steeped in strong psychobilly roots, The Koffin Kats are an institution in punk rock ‘n’ roll. After a full decade of traveling the globe, The Koffin Kats return with their most definitive recording to date, Born Of The Motor – a swagger-filled album full of infectious riffs, fist-pumping punk cadences and hypnotic soulful bellowing that complete a sonically diverse masterpiece.

With Born Of The Motor, The Koffin Kats continue their classic storytelling style, but with their most real, most personal lyrics to date. “Life is hard… life is uncertain – that’s something everyone understands. It’s not where you start or where you end up, it’s how you LIVE your life in between that matters,” says vocalist Vic Victor.

Both a sonic homage to their resident city Detroit and its blue-collar legacy, and a metaphor for being hard-wired towards hard work and persistent ambition, The Koffin Kats charge forward waving a proud flag soiled with blood, sweat and whiskey — defying the decay and chaos that has stained their city in recent years.

Loyal Koffin Kats fans will be satiated with Born Of The Motor just as new fans will be enticed by the majesty of their rock ‘n’ roll prowess.

Recorded at Stu Stu Studios in Livonia, MI and mastered by Adam Ayan (Foo Fighters, Nirvana, Rolling Stones), Born Of The Motor is poised to drive the Koffin Kats to new distances with speed, power, and hell-raising fun. Buckle up and get ready for one hell of a ride!
Eingestellt von Ring Of Fire Records um 03:51 Keine Kommentare:

Yeah, it's true. We're really proud to announce that ROFR will release the brand new studio album "Born Of The Motor" by the probably hardest working band on this planet: KOFFIN KATS

There will be a 180 gram colored vinyl version and also a nice Digipak. Stay tuned for more infos about this...

Check out their US label Sailor's Grave Records for more cool stuff from the Kats or other cool bands! 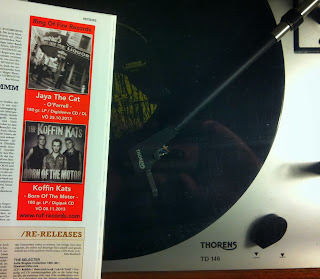 UNBELIEVABLE! Only 5 months after the re-release of Jaya The Cat's masterpiece First Beer Of A New Day on CD the first edition of 1.000 copies is SOLD OUT!!!

But don't worry, the postman brought us another 2.000 copies, cuz we think everbody with a good taste of music should have the chance to call one his own.

Furthermore we're really happy to announce that we will release the 'unofficial first record from Jaya The Cat' O'Farrell on the 25th of October for the first time ever as LP, CD & Download. Whoop!

2.000 CDs arrived and now we're waiting for the vinyls like a 4 year old boy one day before christmas eve :)

More infos about this will come soon...

And be prepared, there will be another amazing release this fall! 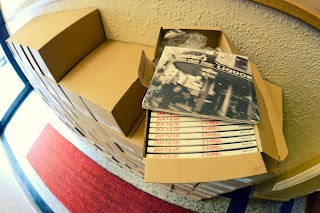 If the postman rings twice...

Any ideas what this could be?

More infos will come next monday!!! 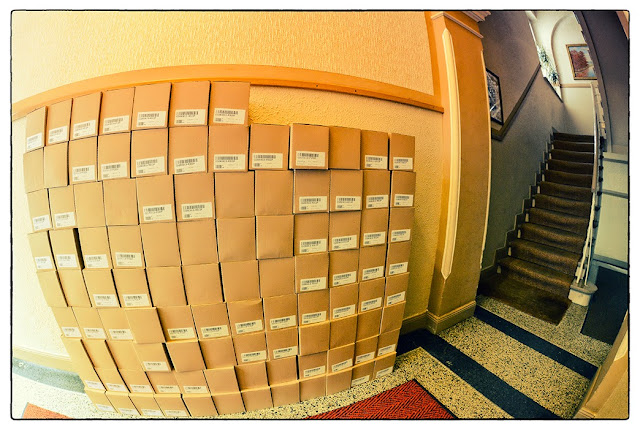 Summer time is Jaya time! Repress of the TNISOH LP out soon!

We're really happy to announce that soon the long awaited repress of the TNISOH LP by Jaya The Cat will be released via Ring Of Fire Records.
It will be a 180 gram black vinyl edition and now with colored label stickers.
A record as great as the current weather! So buy a Sharp VZ 3000 portable record player, suncream and a lot of beer and you'll be best prepared for the 2nd of august! Yeehaa! 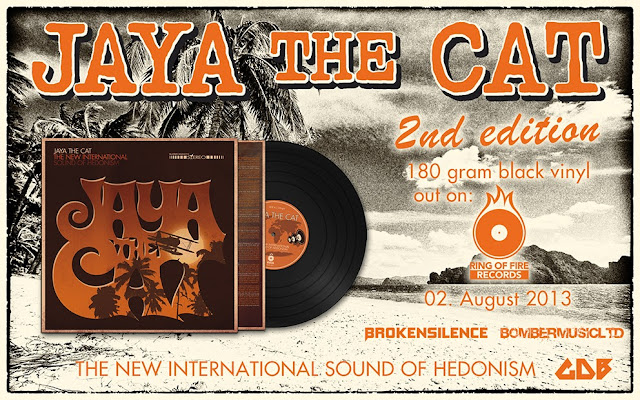 today is the official release date of the brand new Rampires record "bat boys never die". These 12 rockin' tunes will be released as LP with splatter look, Digipack and Digital by the cool label Longneck Records.

Here you can see a first video from the record!

Here is a nice trailer!

Here is a little wake up call!

And here you can get the Blood Pack Bundle, LP + Digipack CD for only 20 €.

That's how a "Beer & Banana Party" should look like 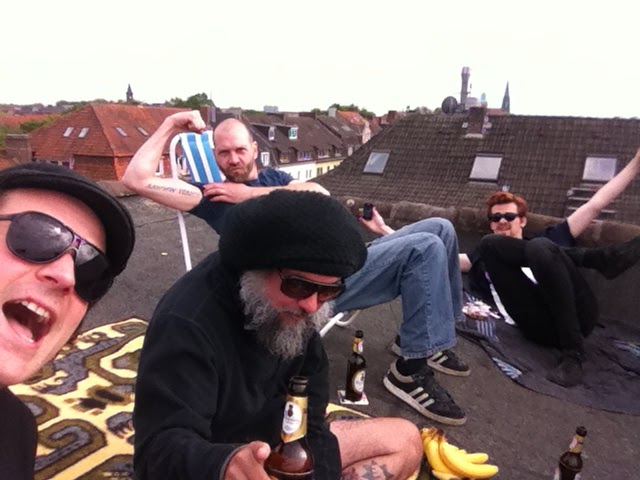 For all the americans with a good taste of music, the First Beer Of A New Day CD/LP and the Kalipso Times 10" are now available at interpunk.

Furthermore here are some nice words about Dr. Ring Ding, his Kalipso Times EP and ROFR :) 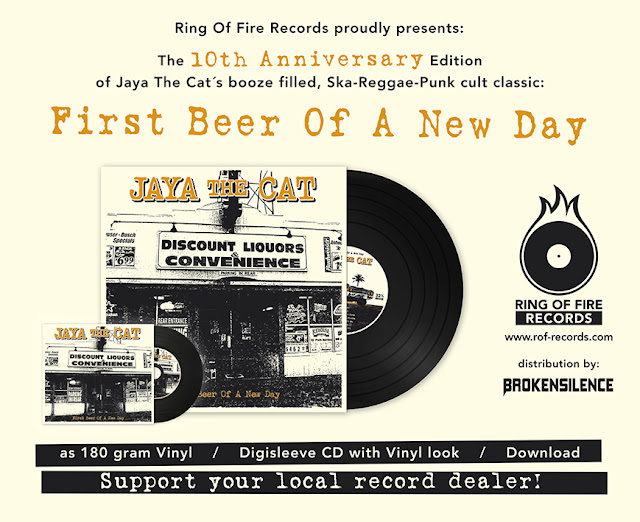 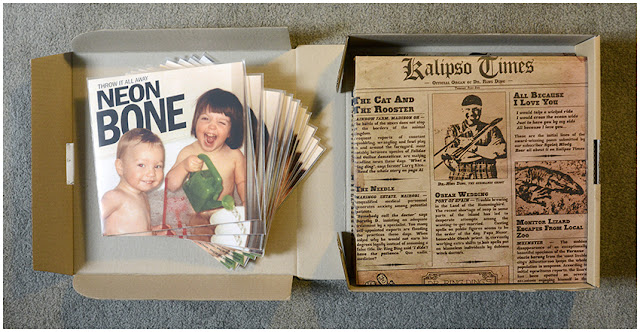 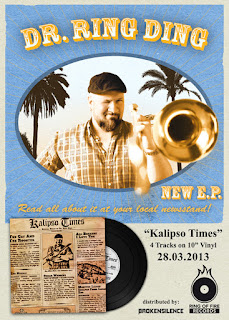 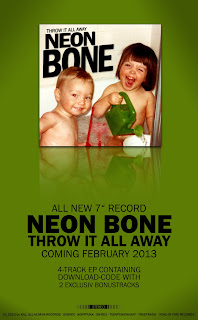