"Overtime" Soundtrack out in two weeks!

Just in time for Halloween Ring Of Fire Records will release the soundtrack for the upcoming film debut by Mario Covone (author/director). Covone, who lives in London and is best known in the scene for his “Video Nasty” comics, was able to win bands from all over the world to record some exclusive songs for his film “Overtime”: The Crimson Ghosts (GER), The Green Mantles (USA), Devilsnite (ARG), So Long Until The Séance (N.IRL), 5 ¢ Freakshow (CAN), The Casket Kids (USA), The Night Creepers (MEX), Flirting With Corpses (UK), Fright Night Nasties (UK), Zombiesuckers (SWE) and Ghoulgasm (USA).

The cover artwork for the film was drawn by none other than Graham Humphreys. Humphreys has legendary status in the horror scene and is responsible for such well-known cover motifs as Evil Dead 1 & 2, the first five parts of Nightmare on Elm Street, The Return of the Living Dead, From Dusk Till Dawn and also for Covone's video Nasty Comics.

The soundtrack is now up for pre-orders in the ROFR Shop! 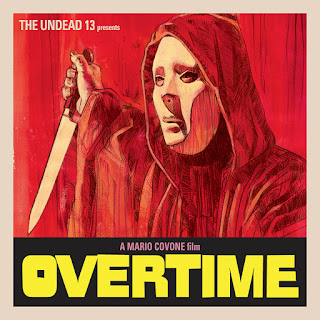